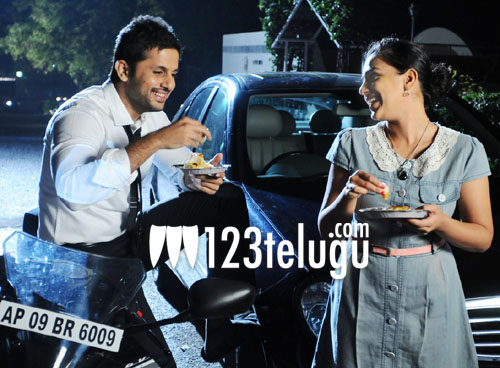 Nithin, Nithya Menen and Isha Talwar will soon be seen in a romantic entertainer titled Gunde Jaari Gallanthayindhe. Vijay Kumar Konda is making his debut as a director and Nikitha Reddy is producing the film. Vikram Goud is presenting it. The film’s shooting was wrapped up recently in Hyderabad and the post-production is going on in full swing. The latest buzz is that the film’s audio is going to be launched on March 23 in Hyderabad. Anup Rubens has scored the music. Last year, the audio of Nithin, Nithya Menen starrer Ishq was launched by Pawan Kalyan and the film went on to become a big hit.

In Gunde Jaari Gallanthayindhe, a superhit song from Pawan Kalyan’s Tholiprema, Yemaindo Emo Eevela has been remixed and Nithin is said to have done some amazing dance moves in the song. Moreover, ace badminton player Jwala Gutta is also making her debut in this film and she’ll be seen in a song. The film is expected to hit the screens in April.