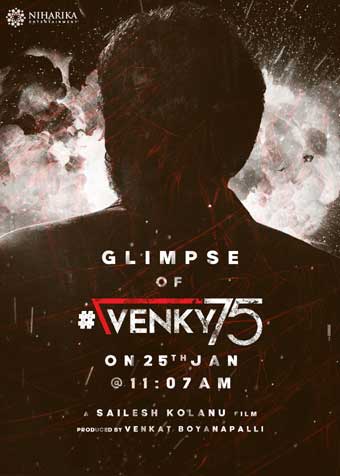 Yesterday it was announced that the star actor Venkatesh and the successful director Sailesh Kolanu teamed up for a film, tentatively titled Venky 75. Niharika Entertainment is bankrolling this high-budget movie.

The makers have come up with an update today. They announced that the glimpse of Venky 75 will be released tomorrow at 11:07 AM. The expectations are high for the movie as it is the landmark film of the star hero.

Heroine, technicians, and shooting details will be announced very soon. Sailesh Kolanu will present Venky in a never-before role in this action thriller. Keep checking this page to know more about the biggie.