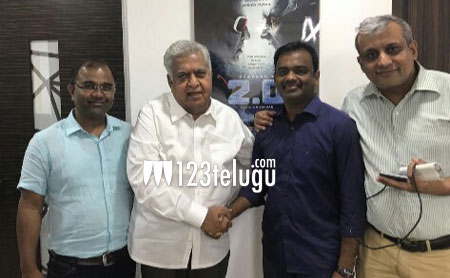 Super Star Rajinikanth and director Shankar’s sci-fi thriller, 2.0, is undoubtedly one of the most eagerly awaited movies in 2018. The film is slated to hit the screens on January 25th, 2018.

As per the latest revelation by one of 2.0’s producers​ Raju Mahalingam, the film’s Telugu version’s AP and Telangana theatrical rights have been sold to noted Telugu film distribution company, Global Cinemas, for a whopping amount. Global Cinemas’ Sunil Narang and Raju Mahalingam inked the deal yesterday.

2.0 is a sequel to the 2010 blockbuster sci-fi thriller, Robot. The sequel also stars Akshay Kumar and Amy Jackson in prominent roles. AR Rahman is the film’s music composer.