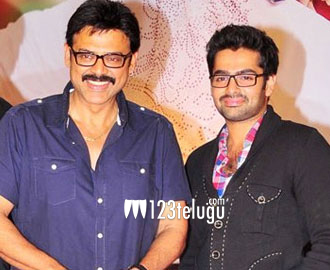 Victory Venkatesh and young hero Ram have teamed up for an official remake of the Bollywood film ‘Bol Bachchan’. The movie has been titled ‘Golmaal’ and the news was confirmed by D.Suresh Babu. The title ‘Garam Masala’ was considered for the movie.

Vijay Bhaskar is directing this multi-starrer. D. Suresh Babu and Sravanthi Ravi Kishore are jointly producing this film. Venkatesh will be seen with Anjali in the movie while Ram will have Shazahn Padamsee as his leading lady.

The movie is expected to hit the screens in the second half of this year.