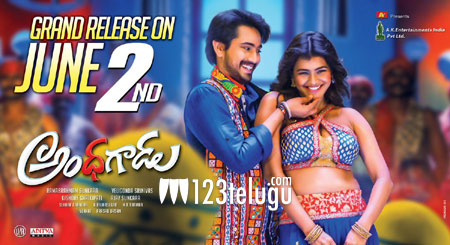 Raj Tharun is on an all time high with back to back hits in his career. He is back with his latest film Andhagadu which is set for a good release this Friday. Producer Ani Sunkara is so confident that he is holding a special premiere of the film in five locations all over the Telugu speaking states.

Writer Veligonda Srinivas turns director for this film which has Raj Tharun’s lucky mascot Hebah Patel. Already, the music has become a decent hit along with the trailer. Raj Tharun plays a blind man in this film and his role is said to be quite entertaining. Here is the list of all the theaters that the film will be showcased in.