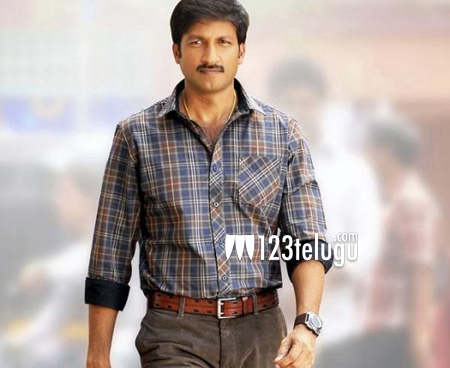 Gopichand, who was last seen in Sahasam, is now acting in B Gopal’s upcoming action entertainer. Nayanthara is playing the lead role opposite Gopichand in this bilingual film. So far, nearly 40 per cent of the film has been completed including two songs. The next schedule is expected to begin in the first half of December and buzz is that some key scenes are going to be shot on Gopichand, Nayanthara, Prakash Raj in this schedule.

Nayanthara is expected to join this film’s shooting soon after completing Sekhar Kammula’s Anamika. This is the first time she’s teaming up with Gopichand. Talking about the film, B Gopal said, “It’s too early to reveal the details about the film, but the story of a brave young man. Gopichand and Nayanthara are doing a great job and it’s going to be a good action drama.”

Thandra Ramesh and Jaya Balaji are producing the film. Mani Sharma is scoring the music and Balamurugan is the cinematographer.