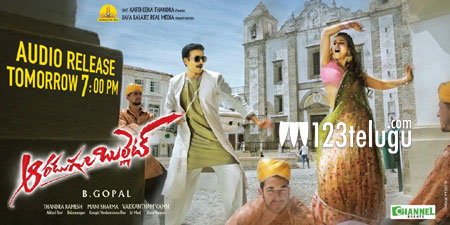 Action hero Gopichand’s much-delayed project, Aaradugula Bullet, is finally hitting the screens on June 9th. The film’s theatrical trailer, which was released a few weeks ago, is getting decent feedback from moviegoers.

As the release date is nearing, the makers have decided to kick-start the promotions, and they are organizing the audio release event today at 7 pm. Touted as a high voltage action drama, the film is directed by mass entertainers’​ specialist B. Gopal.

Nayanthara is the film’s heroine and noted writer Vakkantham Vamsi has penned the story. Music has been composed by Mani Sharma and T Ramesh has produced this action entertainer.