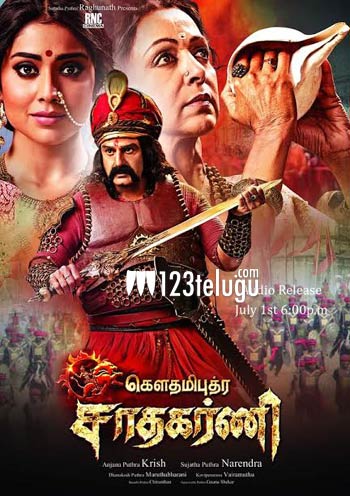 After scoring a memorable success last Sankranthi, Nandamuri Balakrishna’s prestigious 100th movie, Gautamiputra Satakarni, is all set to release in Tamil. Already, the Tamil version’s theatrical trailer, which was unveiled a couple of weeks ago, was received well.

According to the latest update, GSPK’s Tamil version’s audio album will be released during a grand event in Chennai at 6 pm on July 1st. Krish is the film’s director and Shriya Saran is the leading lady. Yesteryear Bollywood heroine Hemamalini played a crucial role in this historic biopic. Tamil distributor Narendra is releasing the film through his RNC Cinema banner. The Tamil version’s release date is yet to be announced.