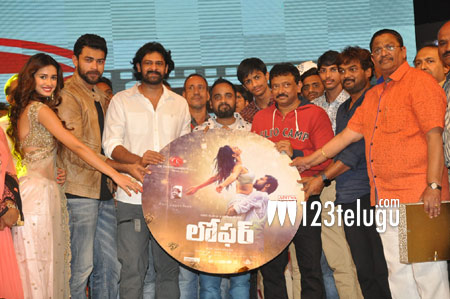 Young Mega hero Varun Tej’s upcoming film Loafer had its audio launched in style in Hyderabad. Young Rebel Star Prabhas was the chief guest at the audio launch and he unveiled the audio cd and presented the first cd to Puri Jagannadh’s guru Ram Gopal Varma.

Speaking on the occasion, Prabhas said that Varun Tej will become a huge star just like his babai Pawan Kalyan and requested all the Mega fans to extend their support to Varun. Prabhas also thrilled the fans when he said, “I like Powerstar”.

Speaking about the film’s director and his good friend Puri Jagannadh, Prabhas said that if at all there is one director in India who writes terrific hero characterizations, it is none other than Puri Jagannadh himself.

Also starring Bollywood starlet Disha Patani, Loafer has its music composed by Sunil Kashyap and the film will be releasing on the 17th of December.