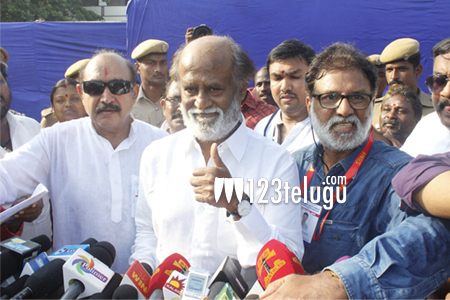 After several months long ugly war of words, allegations, legal suits and even abuses and threats, the day has finally come for the Nadigar Sangam (South Indian Film Artistes’ Association) elections. This morning, the entire Tamil actors’ fraternity, including the leading actors like Rajinikanth, Kamal Haasan, Vijay and others took part in the voting process to choose their leaders.

Speaking on the occasion, Rajinikanth called for unity among the actors irrespective of the result in the elections. Rajini also appealed to the winning team to work towards the betterment of the Tamil actors. The competition is primarily between the Vishal, Karthi and Nasser led Pandavar Ani and the opposition led by senior actor Sarathkumar and team.