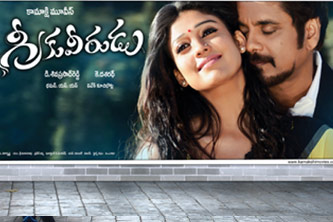 ‘King’ Akkineni Nagarjuna’s ‘Greeku Veerudu’ is on track for a release on April 26th. The movie was originally scheduled for a mid April release, but it had been postponed to 26th sometime back. There are some rumours about further delays in the release, but we have been told that the film will hit the screens as scheduled on the 26th.

Dasarath is the director of this movie and Nayanatara is the heroine. Thaman has composed the music album. ‘Greeku Veerudu’ has been produced by Kamakshi Movies banner. The film was originally titled ‘Love Story’.

Nagarjuna will be seen as an NRI event manager in the film. The second half of the movie is expected to have a good dose of sentiment and family values.