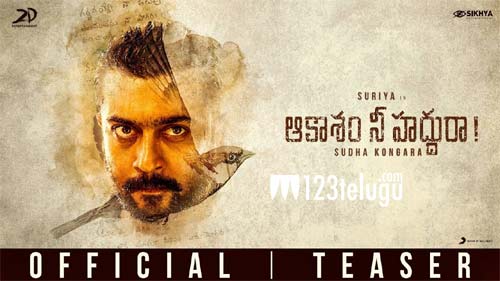 It is a known fact that Suriya is doing a film in the direction of lady director Sudha Kongara who made Guru with Venkatesh. The film is titled Aakaasam Nee Haddhu Ra and its teaser was out today.

The film is based on a real story and Suriya is seen in an intense role after a long time. His role is modeled after Air Deccan Captain Gopinath who revolutionized the Indian aviation industry in a big way. The visuals and drama look quite authentic giving the idea that the film will be really intense.

The teaser has a voice-over of Mohan Babu who is playing a key role in the film. Suriya himself produces this film which will be out in Tamil and Telugu simultaneously.