Ground Breaking Ceremony of Mahatma Gandhi Memorial Plaza in Irving, TX.
Published on May 5, 2014 9:00 am IST 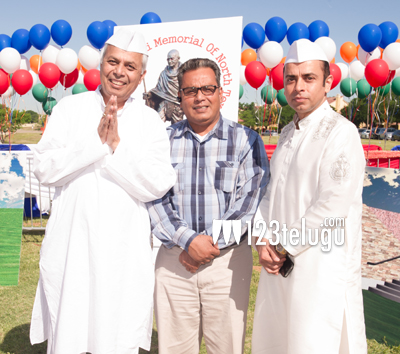 “The 7 foot tall 30 inch wide Bronze statue was cast in Andhra Pradesh, India and will be installed on a 6 foot tall pedestalwith a big flatform, and a granite wall in the back will be adorned with inscriptions from Gandhi’s quotations and sayings from Dr. Martin Luther King Jr., Nelson Mandela and Albert Einstein, President Obama etc., Grand Opening ceremonies are set for October 2nd(Gandhiji’s Birthday) and are expecting Mahatma Gandhi Family, Martin Luther King Family and Nelson Mandela Family members besides many other invited dignitaries form the USA and India”. said, Dr. Prasad Thotakura, Chairman of the Mahatma Gandhi Memorial of North Texas (MGMNT)”.
The estimated total project around $700,000 is borne entirely by the community and not a dime will come from the Irving City funds. However, people can donate generously and more information can be obtained from www.mgmnt.org or from the project Chairman, Dr. Prasad Thotakura at 817-300-4747 or prasadthotakura@gmail.com.

Nothing ever happens in the world without the drive of an individual and his or her supporters. For the last years, under the leadership of Dr. Prasad Thotakura, Chairman, Mahatma Gandhi Memorial of North Texas (MGMNT) the entire team has been working very hard to have an iconic representation of Mahatma Gandhi in Dallas area.
MGMNT team is led by Dr. Prasad Thotakura, Chairman, Mr. Taiyab Kundawala, Co-chair, Mrs. Swati Shah, Co-chair, Rao Kalvala, Secretary, Dilip Patel, Treasurer, and Directors – Piyush Patel, Shabnam Modgil, Jack Godhwani, Paul Pandian and Fundraising Chairs – John Hammond, Sudhir Parikh, Kuntesh Choski and Advisory Board of Directors like Padmashri AK Mago, Prof. Caroline Brittle, MVL Prasad etc.,
The event was graced by her Excellency Gov. Nikki Randhawa Haley. She is the first woman Governor of South Carolina, the youngest Governor in the United States, and the first Indian American female Governor.
The Governor said, “ that there is no reason we cannot have peace and love with everyone, and one thing he constantly said was if we want to truly have peace and love, we have to start with Children. By putting this statue in this park, we are starting out with children, reminding them who he was, reminding them what he was about, and reminding them of the celebration he wanted his life to live on”.
She then turned to Dr. Prasad Thotakura and said, ” Prasad, there is nothing you could not do.” Indeed, that is the truth.

She continued, “When I look at the statue, I see a man of the peace. To walk in the state house of South Carolina as a first India American woman as Governor, I hoped that’s exactly what he wanted for all communities, for all people, and for all minorities to be able to be free as they wanted to be, as peaceful as they wanted to be, and to get to contribute to the world, and that is what we are celebrating today”.

She said, “Indian American community is the least dependent community on receiving aid from the state, most affluent and the most educated communities in America.”

Mayor Beth Van Duyne appreciated the community for funding it entirely on their own and she asserted that Zip code 75038 in Irving had the most diverse population in America.
Consul General of India Mr. Parvathaneni Harish attended the ceremonies as a Special Guest of Honor and congratulated the MGMNT Team and the Dallas area community for planning to make one of the greatest monuments in the USA.
Mahatma Gandhi’s soul would be smiling at the people gathered in the park today. He lived and sacrificed his life for the unity of people of the Subcontinent. As Indian flag colors like orange, white and green and also US flag colors like red, white and blue balloons were released into the bright sunny blue skies. It was beautiful sight to see with an imagination of smiling affectionate face of Mahatma Gandhi – seeing the community members from all regions, religions and races joining hands to get the memorial built as a reminder of unity. Indeed it is a great accomplishment for the people of Dallas.