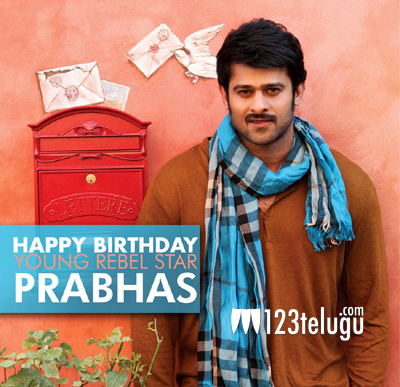 Today is the birthday of Young Rebel Star Prabhas. This handsome hunk was born on October 23 1979 in Chennai to U. Suryanarayana Raju and Siva Kumari. He is the nephew of Rebel Star Krishnam Raju.

Prabhas started his career in the year 2002 with the movie ‘Eeshwar’ but it was the 2004 film ‘Varsham’ which gave Prabhas his first hit. He followed it up with ‘Chhatrapati’ in 2005 and this movie firmly established him as a rising star in the Telugu Industry. ‘Darling’ in 2010 and ‘Mr. Perfect’ in 2011 cemented his status as a bankable hero. But it was the 2013 hit ‘Mirchi’ which changed everything for this Young Rebel Star.

The movie turned out to be a smash hit and Prabhas’s stylish look won him many fans. In fact, Prabhas is now one of the most popular Telugu stars on social networks. Prabhas is currently working for the epic period drama, ‘Baahubali’.