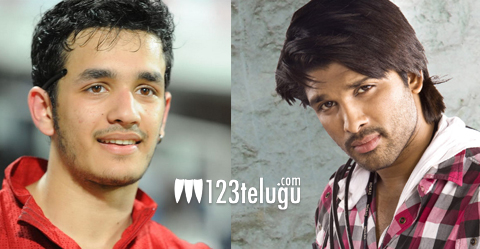 Today is the birthday of Stylish Star Allu Arjun. His birthday is also shared by two other people – Future Star and Little Star. Who are they? Well, the future star is Akhil Akkineni and the Little Star is Akira Nandan, son of Power Star Pawan Kalyan.

Allu Arjun was born on 8th April 1983 to Allu Aravind and Smt Nirmala. He came into the industry as Megastar Chiranjeevi’s nephew, but soon created a unique identity for himself with his terrific dances and stylish costumes. Allu Arjun has a good following among young people and students. He made his acting debut in 2003 with ‘Gangothri’ and has been steadily growing as an actor over the years. He scored a big hit with his last film ‘Julayi’ and is all set to hit the screens with ‘Iddarammayilatho’ in May.

Akhil Akkineni is a star in the making. He is all set to make his acting debut in the future but his terrific good looks and his legendary genes have already given him a lot of fans. Born to Akkineni Nagarjuna and Smt Amala, Akhil has inherited the legacy of the Akkineni family. Akhil is a good cricket player and he is currently pursuing filmmaking studies in the US.

As for the little one Akira Nandan, he was born on 8th April 2004 to Pawan Kalyan and Renu Desai.

Happy Birthday to all the three stars!!