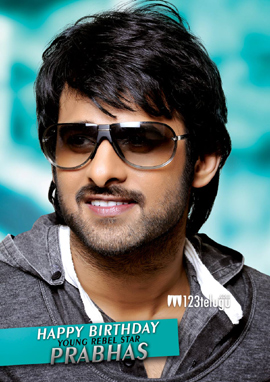 Today is the birthday of Young Rebel Star Prabhas. The macho hero was born on October 23, 1979 in Chennai to U. Suryanarayana Raju and Siva Kumari. He happens to be the nephew of Rebel Star Krishnam Raju. Prabhas is known in the industry as a talented actor and good human being.

Prabhas started his career in the year 2002 with the movie ‘Eeshwar’ but it was the 2004 film ‘Varsham’ which gave Prabhas his first hit. He followed it up with ‘Chhatrapati’ in 2005 and this movie firmly established him as a rising star in the Telugu Industry.

Over the years, Prabhas has been gradually expanding his market and he became the darling of family crowds with ‘Darling’ in 2010 and ‘Mr. Perfect’ in 2011. He is now currently working for ‘Mirchi’, which is set for release on January 11th 2013. He also has a big budget project coming up with ace director S.S.Rajamouli.