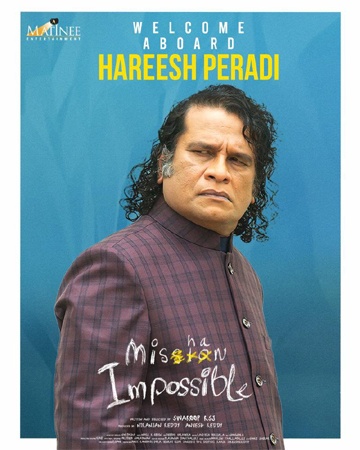 Bollywood actress Taapsee’s comeback Telugu film, Mishan Impossible, now has a special addition to its cast. Noted Mollywood actor Hareesh Peradi, acclaimed for his villainous characters in over 40 movies, has been roped in for a crucial role in this comic caper.

Harish Peradi is well known for his performance in movies such as Mersal, Khaidi, Kokila, Spyder, Raatchasi, Pulimurugan, Bhoomiyile, Manohara, Swakaryam, and Muddy. Left Right Left and Vikram Vedha to name a few. His role in Mishan Impossible has been kept under wraps by the makers.

Swaroop RSJ of Agent Sai Srinivasa Athreya fame is directing Mishan Impossible and Niranjan Reddy and Anvesh Reddy are bankrolling it under Matinee Entertainment. Pasha is the Associate Producer.