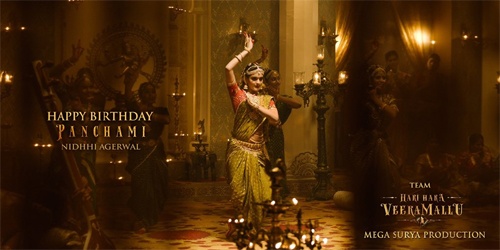 It is a known fact that Pawan Kalyan is doing a film called Hari Hara Veera Mallu. The film will resume its shoot soon and Niddhi Agerwal plays the heroine.

As it is Niddhi’s birthday today, the makers have revealed her look from the film. Nidhi is seen as a traditional dancer in the poster and she looks regal.

Niddhi will be seen as Panchami in this film that has Jacqueline Fernandez as the heroine. This look of Niddhi has gone viral and raised the hype in no time. Krish directs this film which will be out next year.