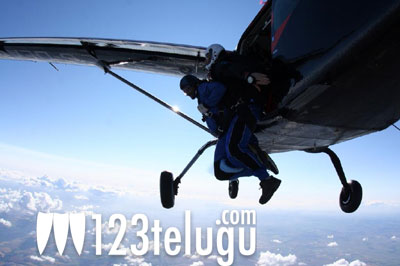 Director Harish Shankar, who scored a massive hit in 2012 with Power Star Pawan Kalyan’s ‘Gabbar Singh’, has literally jumped out of a plane. Now before you begin to wonder, Harish Shankar has jumped out for a Skydive.

He made the jump at a small town called Swindon on the outskirts of London. “Yesss I did it.. Skyhigh excitement “, he tweeted. Harish will soon begin work on Young Tiger NTR’s new film which is being produced by Dil Raju.

Looks like Harish Shankar sure had one hell of a jump.