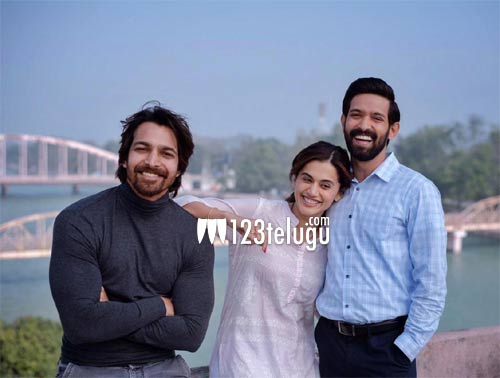 Harshvardhan Rane, who played lead roles in films like Avunu, Anamika, and Prema Ishq Kadhal, has landed a big offer in Hindi. The actor has been focusing more on Bollywood in the past few years, and he went on act in films like Sanam Teri Kasam and Paltan.

The actor has now been roped in to play a key role in Taapsee starrer Haseena Dil Ruba. Directed by Vinil Matthew, the film also stars Vikrant Massey in a lead role, and it is said to be a romantic thriller. Considering that Taapsee’s career has been flourishing in Hindi in recent years, it is indeed a big opportunity for Harshvardhan Rane, who was last seen in Bellamkonda Sai Sreenivas starrer Kavacham.

The film’s first look, where Taapsee is shown stepping on a pool of blood captured everyone’s attention and it remains to be seen how the mystery unfolds. Haseena Dil Ruba is slated for release on September 18, 2020.

“I maybe bad but I’m perfectly good at it”
Stepping into the world of #HaseenDillruba 🌹.
Can’t wait for you guys to meet HER in theatres on 18th September 2020! pic.twitter.com/mmjZs1lYdC