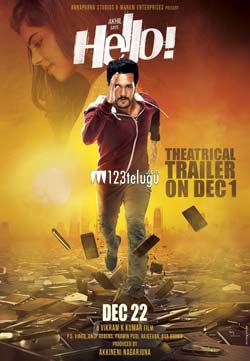 Here’s the most eagerly awaited update on young hero Akhil’s second film, Hello. This highly-anticipated romantic action thriller’s theatrical trailer will be unveiled tomorrow. Just like they did for the teaser, the makers have made the surprise announcement for the trailer just a day ahead of its release.

Hello’s action-packed teaser has clocked nearly 8 million views and took the expectations to the next level. The film is slated for a December 22 release. Malayali beauty Kalyani Priyadarshan is making her acting debut with Hello. Vikram Kumar is helming this movie and Annapurna Studios and Manam Enterprises banners are jointly producing it.