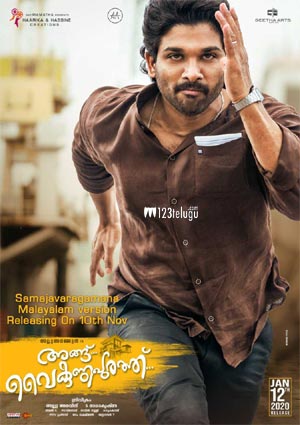 The makers of Allu Arjun and Trivikram’s much-awaited Sankranthi entertainer, Ala Vaikunthapuramulo, have just unveiled the Malayalam version’s title and first look poster. The film has been titled Angu Vaikuntapurathu in Malayalam.

Furthermore, the super hit romantic number Samajavaragamana’s Malayalam version will be out on the 10th of November. Allu Arjun has a huge fan base across Kerala and this film is expected to strike big at Kerala box-office during the festive season.

Also starring Pooja Hegde, Tabu, Navdeep and Sushanth in prominent roles, Ala Vaikunthapuramulo and Angu Vaikuntapurathu will be released on January 12. Thaman has composed the film’s soundtrack. Allu Arvind and S Radhakrishna are jointly bankrolling the film.