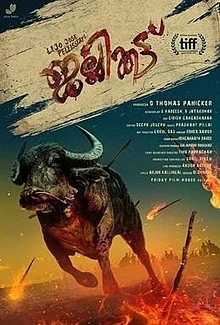 Oscar Awards are considered to be one of the prestigious awards ever. Every year, a number of films get nominated but only a few end up winning the awards.

Every year, Indian films are also sent in the best International film category and this year, the Malayalam film Jallikattu has bagged the lucky chance and will be India’s official entry to the Oscars 2021. The film is directed by Lijo Jose and deals with a village who is after a buffalo who goes rogue in the village.

Jallikattu was chosen out of 27 films. Some of the other movies in the race to be India’s entry for Oscars 2021 were The Disciple, Shakuntla Devi, Shikara, Gunjan Saxena, Chhapaak, AK vs AK, Gulabo Sitabo, Bhonsle, Chhalaang, Atkan Chatkan, Serious Men, Bulbbul, Kaamyaab, The Sky is Pink, Chintu ka Birthday and Bittersweet.