Here is the next song update from Macherla Niyojakavargam
Published on Aug 4, 2022 9:04 pm IST 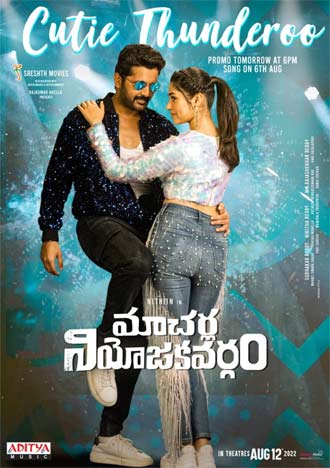 Young hero Nithiin’s Macherla Niyojakavargam is getting ready for a big release on August 12th. The film’s trailer and the songs released till now were very successful in grabbing the audience’s attention.

Now the makers have given an update regarding the next song’s release. Titled Cutie Thunderoo, the promo will be out tomorrow at 6 PM and the complete song will be released on 6th August.

Produced by Sudhakar Reddy and Nikitha Reddy, the film has Krithi Shetty and Catherine Tresa as the female leads. It is helmed by debutant director M.S. Rajasekhar Reddy