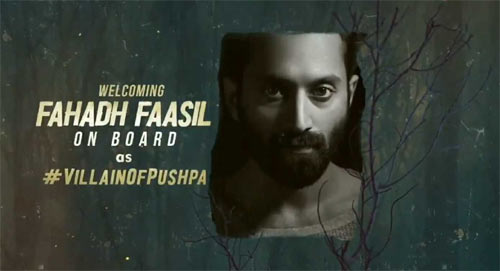 Yesterday, the makers of Allu Arjun and Sukumar’s highly-anticipated pan-India action drama, Pushpa, made a thrilling announcement regarding the film’s main antagonist. Acclaimed Malayalam actor Fahadh Faasil has been roped in to play Allu Arjun’s nemesis in this intense drama.

Now, the latest reports reveal that Fahadh will be joining Team Pushpa in April first week in the next schedule that will take place in Tenkasi, Tamil Nadu. Apparently, both Fahadh and Allu Arjun will shoot some electrifying scenes in the upcoming schedule.

Rashmika Mandanna is the leading lady in this Mythri Movie Makers’ production. Devi Sri Prasad is scoring the soundtrack. The film is scheduled for release on August 13.