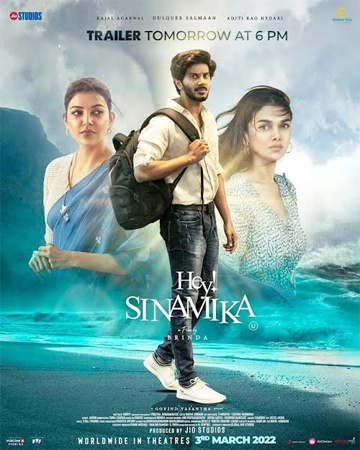 Mollywood actor Dulquer Salmaan’s upcoming Tamil movie, Hey Sinamika, has completed the censor formalities. Directed by the popular choreographer, Brinda, the movie has been awarded a clean U certificate from the CBFC.

Besides, the makers have also announced that the trailer of the movie will be out tomorrow at 6 PM. There is no information about which celebrity will unveil the trailer.

Kajal Aggarwal and Aditi Rao Hydari are playing the female leads in this romantic comedy entertainer.

Jointly produced by Jio Studios, Global One Studios and Viacom18 Studios, the movie is scheduled to hit screens on March 3, 2022. Having the music of Govind Vasantha, the movie will also be released in Telugu, Kannada and Malayalam.