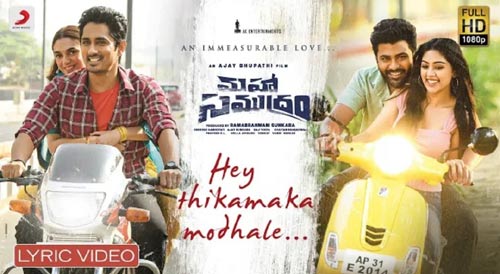 Maha Samudram is a film that is up for a release on the 14th of October. The trailer has created a solid interest among the audience and now, the makers have released a new song.

Titled Hey Thikamaka Modale, this song is a soft romantic number with a simple and neat tune. The singing makes all the difference as Nutana Mohan’s voice gives this song a cool sound. Chaitan Bhardwaj’s composition and lyrics are meaningful.

The chemistry between the couples, Shawra-Anu Emanuel and Siddharth-Aditi Rao is quite good. The songs of these films are composed in such a way that they will grow on you more as time passed by. Maha Samudram is directed by Ajay Bhupathi.