Hi madam, I’m Prabhas from Mogalthuru: Fans thrilled to see Prabhas open up like never before
Published on Oct 27, 2021 9:04 am IST 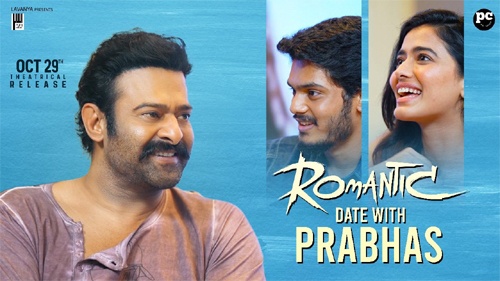 After launching the theatrical trailer for his Bujjigadu and Ek Niranjan director Puri Jagannadh’s latest production, Romantic, hero Prabhas recently did a special video interview with the film’s hero and heroine, Akash Puri and Ketika Sharma. And Prabhas’ fans are pleasantly surprised to see their Darling open up like never before.

Throughout the interview, Prabhas was at his jovial best, as he teased both Akash and Ketika while also making them feel comfortable in his presence. For instance, when Ketika introduced herself, saying, “Hi sir, I am Ketika from Delhi, Prabhas replied, saying, “Hi madam, I am Prabhas from Mogalthuru.”

Prabhas also pulled Akash and Ketika’s legs by catching them lying red-handed. Prabhas concluded saying that he is sincerely hoping that Romantic will become a huge success. Directed by debutant Anil Paduri, Romantic also features senior actress Ramya Krishna in a key role. The film is slated for release on October 29.