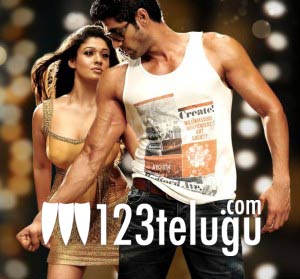 In the upcoming action entertainer ‘Krishnam Vande Jagadgurum’, Rana is seen as B.Tech babu, a selfish actor who is not interested in the drama business and wants to do something else. He is forced to perform in the dramas by his grandfather Kota Srinivasa Rao and he is not happy, until one day he meets Nayanatara. As reporter and documentary filmmaker Devika, she opens his eyes to the inustice and suffering around him. She causes a complete change in his actions and thoughts.

What does she show him? How does she change a selfish B.Tech babu into a selfless and courageous human being who is willing to fight for his fellow men? That needs to be seen on the big screen this Friday. The movie is getting a big release tomorrow and Krish Jagarlamudi is the director.

Mani Sharma is the music director and all eyes are on director Krish to see how he has canned the visuals of the super hit track ‘Jarugutunnadi Jagannatakam’.