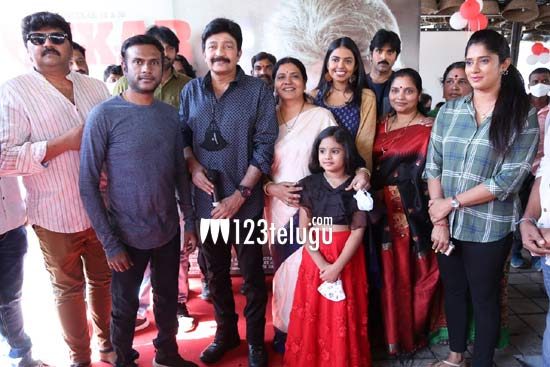 Popular actor, Rajashekar turned a year older today. The actor’s birthday celebrations have happened grandly in Hyderabad today. On this occasion, Kinnera song, composed by Anup Rubens, from his upcoming movie, Shekar, has been released.

Addressing the media, Rajashekar said that he had gone through many worst situations after being admitted to the hospital due to Covid-19. The actor turned emotional and expressed that he felt that his life had come to an end at that time but survived the tough phase with the blessings of fans. Rajashekar thanked his ardent fans for their unconditional love towards him.

Speaking about Shekar, the actor said he acted in it after recovering from Coronavirus. “We put all our blood, sweat, and tears in making this movie. For Shekar, we all put efforts equivalent to that of ten movies,” said the actor. Rajashekar mentioned that the movie has come out very well because of Jeevitha. He also requested everyone to watch it in theatres.

Directed by Jeevitha Rajashekar, the movie has Shivani Rajashekar, in a crucial role. Muskaan Kubchandhani, Aathmeeya Rajan, Abhinav Gomatam, Sameer, Bharani, and others played key roles in this movie.