I am the first amongst millions of fans: Pawan Kalyan wishes Chiranjeevi
Published on Aug 22, 2021 3:15 pm IST

On the occasion of Megastar Chiranjeevi’s 66th birthday, the most memorable wish has come from none other than his younger brother Pawan Kalyan. Janasena Party’s Twitter handle tweeted a heartfelt note penned by Pawan Kalyan.

“Chiranjeevi garu has been a guiding force to me and many others. I feel privileged to be his brother and I grew up watching him and following his principles. I am the first amongst the millions of fans who adore Annayya,” Pawan said in his note.

Pawan also said that his brother continues to be humble and grounded despite reaching great heights in his life and career. Pawan concluded saying that even though he was born as his brother, Chiru always raised him like a fatherly figure. 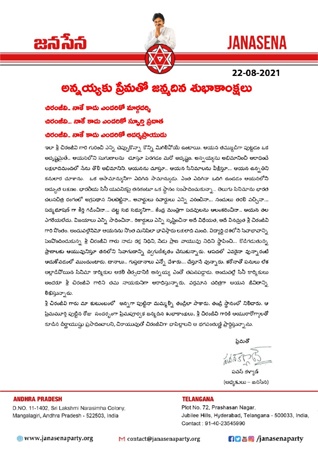