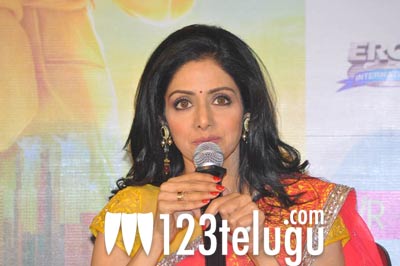 Sridevi’s charisma doesn’t seem to fade away, despite her age. Earlier today, when she landed at a leading multiplex in Hyderabad to launch the trailer of her upcoming film English Vinglish, there was a commotion to catch a glimpse of her. Along with her, Boney Kapoor, Balki, Gauri Shinde and Priya Anand graced the event. Talking to the media, Sridevi said, “Hyderabad is like my second home and I have spent several years of my life shooting in various studios here. I don’t feel like I am making a comeback now. When Gauri Shinde approached me with the script, I completely fell in love with it and decided to act in the film.” The film is about the journey of a housewife who decides to learn English to impress her family. When someone asked if she was feeling nervous or excited about the film, Sridevi said, “It’s a combination of everything. The film is more about human emotions and I am sure people can easily relate to it.” Gauri Shinde said that the film was inspired from her mother’s life and it’s a general scenario in several families where mothers struggle to learn English. Amit Trivedi has composed the music. Balki has produced the film. English Vinglish will hit the screens on October 5 in Telugu, Tamil and Hindi.