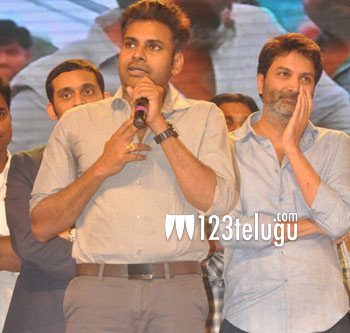 Power Star Pawan Kalyan unveiled the audio album of his ardent admirer Nithiin’s forthcoming romantic drama under Trivikram’s direction, A..Aa. Speaking on the occasion, Pawan spoke about his association and friendship with Trivikram and said that he admires Trivikram’s writings a lot.

Pawan went on to say that he has immense respect for writers for being the key persons behind the powerful roles played and dialogues uttered by stars on the screen. The Power Star also credited the writers for creating an image for stars with their dialogues.

Incidentally, Pawan also stated in the promotional interviews of Sardaar Gabbar Singh that he loves writing and he even penned the script for Sardaar and Johnny.