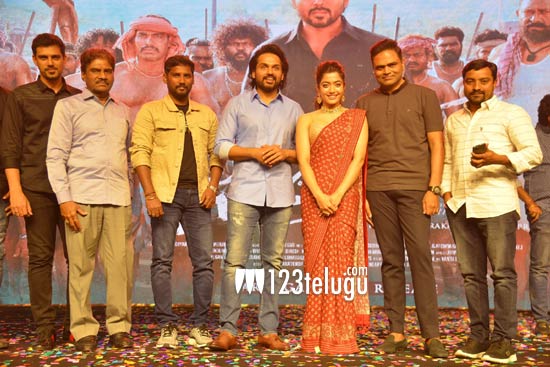 Kollywood star Karthi has landed in Hyderabad to promote the Telugu version of Sulthan. The film is slated for release this Friday (April 2nd). The pre-release event took place in Hyderabad tonight. Speaking at the event, Karthi displayed his large heart by wishing that his elder brother Nagarjuna’s Wild Dog, which is also releasing on April 2, will become a big hit.

“My annayya Nagarjuna garu has a big heart and he wished Sulthan a huge success. And I pray to god that Wild Dog will become a big hit too. I request you all to watch Sulthan after watching Wild Dog. Even Sulthan is very wild,” Karthi said.

The talented performer also revealed that Sulthan has a unique plot. “In Mahabharata, Krishna took Pandavas’ side. What if he took Kauravas’ side? Sulthan is all about this unique idea,” Karthi revealed, further adding that Sulthan has everything from comedy, romance and emotions in equal proportions,” Karthi said. Starring Rashmika Mandanna’s Kollywood debut. This Bakkiyaraj Kannan directorial is produced by SR Prabhu.