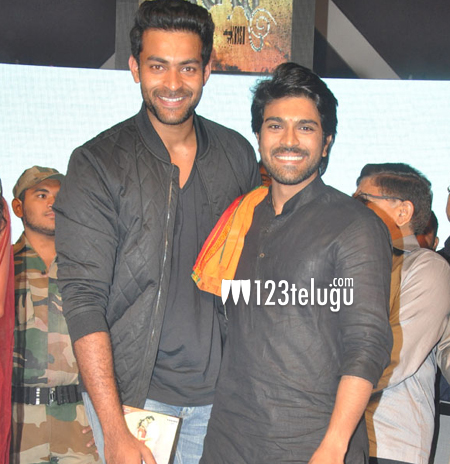 The audio launch event of young Mega hero Varun Tej’s upcoming war drama, Kanche, took place last night in Hyderabad. Ram Charan unveiled the audio album, and speaking on the occasion, he heaped praises on Varun Tej and the film’s unit. Charan said that Varun is not only the most handsome actor in the Mega family, but also a gutsy actor of the lot.

Speaking further, Charan appreciated Varun Tej’s guts for accepting a film like Kanche as his second project. Charan even stated that he wish he too was as gutsy as Varun in accepting such stories in the future. Charan also showered praises on Kanche’s director, Krish, and revealed that he has been longing to work with Krish for the last 5 years.

The audio album, composed by Bollywood music director Chirantan Bhatt, has won appreciation from music lovers for its profound lyrical quality and an authentic period flavor.