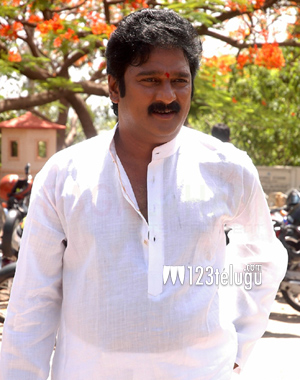 Krishna Bhagwan is one of the finest comedians we have in the industry today and he has a peculiar way of uttering dialogues which evokes good laughter. He is right now quite busy with a good number of films in his hand.

Krishna Bhagawan has earlier essayed villain roles too and has got good recognition for his antagonist performance in ‘April Okati Vidudhala’. In the beginning days Krishna Bhagawan was a stage artist and a very good mime artist which has landed him in to movies. Recalling his entry in to industry Krishna Bhagawan said “I had an opportunity to perform a mime skit in front of Jandhyala and he immensely liked my performance. Soon after he has offered me a role in ‘Srivari Sobhanam’ and that was first official debut in to films.”

However it was his role in Maharshi which got him great recognition. After a brief hiatus he got his next big break with ‘Avunu Vallidharu Ishtapadaru’ and thereafter there has been no looking back for him and is one of the busiest comedians now.