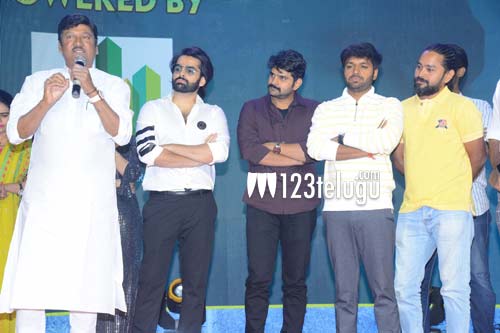 The pre-release event of veteran hero Rajendra Prasad and young hero Sree Vishnu’s upcoming comedy drama, Gaali Sampath, was held tonight in Hyderabad. Hero Ram was the chief guest at the event and his speech was one of the main attractions tonight.

Ram was all praise for Rajendra Prasad. “Our banner (Sravanthi Movies) was launched with his Ladies Tailor. He was a major part of our childhood. He is a treasure for Telugu film industry. Just a few glimpses are enough to know what a great actor is like. I have seen him in the trailer and I wholehearted wish that Rajendra Prasad garu gets National Award for Gaali Sampath,” Ram said.

Talking about his Vunnadi Okate Zindagi co-star and Gaali Sampath’s hero Sree Vishnu, Ram said that Sree Vishnu is one of the very few genuine people in the industry. Ram went on to wish the entire team a grand success on the 11th of March.

Directed by Anish Krishna, Gaali Sampath has Lovely Singh as its leading lady. Star director Anil Ravipudi has penned the screenplay, besides presenting the movie and acting as a direction supervisor. S Krishna has produced the film along with Harish Peddi and Sahu Garapati.