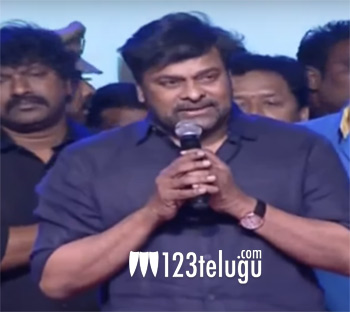 Megastar Chiranjeevi was the chief guest at the pre-release event of young hero Naga Shaurya and Kannada actress Rashmika Mandanna’s upcoming romantic entertainer, Chalo. Speaking at the event, Chiru said that he attended the event to give a boost to Naga Shaurya ahead of the film’s release.

Chiru went on to say that the Telugu film industry needs fresh and young actors like Naga Shaurya. “Newcomers bring in exuberance and grit and Tollywood needs it very much,” the Megastar said. Chiru further said that he will be the first person to support all the young talents who will enter Tollywood in future.