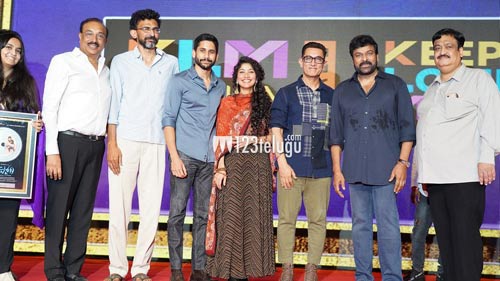 Bollywood star Aamir Khan was the chief guest at the Love Story Unplugged pre-release event held in Hyderabad tonight. Speaking at the event, Aamir said that even though he met Chay for the first time during Laal Singh Chaddha’s shoot, he bonded with Chay quite well and that he felt Chay was a long-time friend.

Aamir further said that he will watch Love Story’s FDFS in a movie theater. “Theaters are still not running in Maharashtra. But I will have a special screening of Love Story,” said the Bollywood superstar. Aamir further said that he had seen Sai Pallavi’s songs on YouTube, but never watched her movies. “I became Sai Pallavi’s fan after seeing her in the first clip from a song in the movie,” said Aamir.

Aamir went on to wish the film’s director Sekhar Kammula, music composer, DP, producers and rest of the cast and crew members ahead of the film’s release. Love Story is gearing up to open in cinemas on September 24.