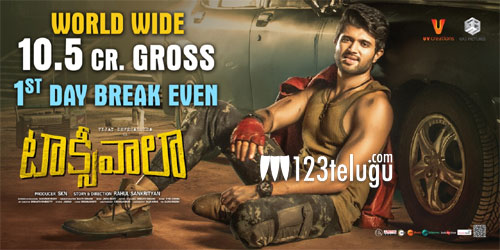 As we discussed earlier today, the word of mouth for Taxiwaala is quite good and this has clearly shown on the collections of the film. The makers have today revealed that the film has made a gross of 10.5 crores on the first day itself and with this, they say that the film has already broken even.

The film is produced by GA2 banner and UV Creations and they are set to reap good money from the film. The occupancy on Sunday is also quite solid and the film is moving ahead with each passing show.

Rahul directs this film which has Vijay Devarakonda in the role of a Taxi driver. The comedy and thrills have worked wonders for the film and as there are no big films, the audience is lapping Taxiwaala in a big way.