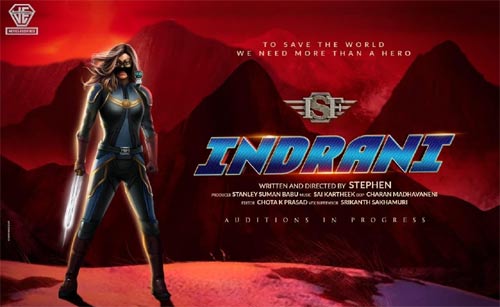 Stephen is debuting as a director with an adventurous movie, Indrani, to be produced by Stanley, Suman, Babu P under the banner, Veronica Entertainments.

The Story is designed in a unique and never seen before concept on the Telugu screen. The makers are gearing up to make this an Indian supergirl film by incorporating all commercial elements, besides the action sequences.

The filmmakers have informed that this Movie has great scope for two other heroines who will travel throughout the story along with the main lead.

Stephen, who happens to be directing this film is trained at the New York Film Academy. The pre-production works have been completed. The auditions for all characters are in process.

Well, the good news is that the team will be casting new talent, besides roping in some noted actors. Producer, Stanley Suman Babu P said, “The title character Indrani will be played by a popular actress or a newcomer. We all have seen superhero films to date, but Veronica Entertainments is going to show the first Indian supergirl.”

The film Indrani will have some breathtaking stunts. Sai Kartheek’s music and background score is going to be one of the major highlights. Our own Chota K Prasad has taken the responsibility for editing this ambitious project.