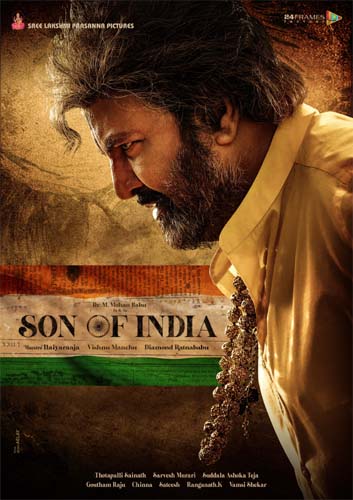 The first look poster from veteran actor-filmmaker Mohan Babu’s upcoming film, Son of India, has been unveiled this morning. Mohan Babu looks intense in a sakt and pepper avatar and the rudrakshaa in his neck. The tricolour in the background and of course the title suggest that the film is going to be an intense patriotic drama.

Son of India will have Mohan Babu playing a never-seen-before powerful role. Besides portraying the titular role, he is also providing screenplay for this ambitious project. The film is being directed by noted writer Diamond Ratnababu. The makers claim that the storyline and genre are first of its kind in Tollywood.

Son of India is a joint production venture of Sree Lakshmi Prasanna Pictures and 24 Frames Factory. Maestro Ilayaraja is scoring the soundtrack. Hero Vishnu Manchu’s wife and Mohan Babu’s daughter-in-law Viranica Manchu is turning stylist with the film, and the impressive makeover she has given for her father-in-law can be seen in the poster.