Interesting buzz: Chiranjeevi and Pawan Kalyan to star in this crazy project?
Published on Nov 7, 2021 9:09 am IST 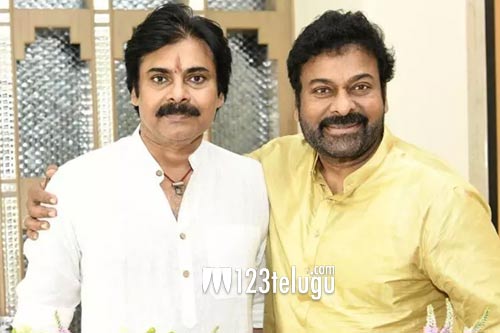 If the ongoing buzz in Tollywood circles is to be believed, Megastar Chiranjeevi and his brother Pawan Kalyan may share screen space in Chiru’s just launched 154th film. Furthermore, both Chiru and Pawan will be seen playing brothers in this crazy project.

In the past, the Mega brothers had acted together in Chiru’s Shankar Dada Zindabad. However, that was a very small cameo, whereas Chiru154 could have Pawan playing a significant role. Fans will have to wait until the makers at Mythri Movie Makers come up with an official announcement regarding this news.

Chiru154 is set in Vizag coastal area, and the Megastar will be seen in an ultra mass avatar. DSP is scoring the soundtrack.