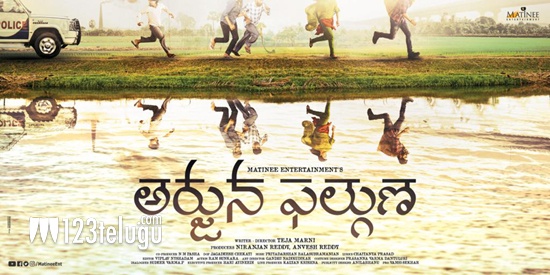 Hero Sree Vishnu has joined hands with Johaar fame Teja Marni for an interesting project. The film is being produced by Niranjan Reddy and Anvesh Reddy who are currently bankrolling Chiranjeevi’s Acharya and Nagarjuna’s Wild Dog.

The makers today revealed the title and theme poster. The film has been titled Arjuna Phalguna. It is well known that Arjuna is also called as Phalguna, because he was born in the month of Phalguna. The title Arjuna Phalguna is designed in Sanskrit script and a police patrolling vehicle can be seen chasing a group of friends.

Arjuna Phalguna is going to be yet another intriguing film from Matinee Entertainment banner. Chennai beauty Amritha Aiyer, who has become one of the most sought after actress in Tollywood after RED and 30 Rojullo Preminchatam Ela, is paired opposite Sree Vishnu in Arjuna Phalguna.