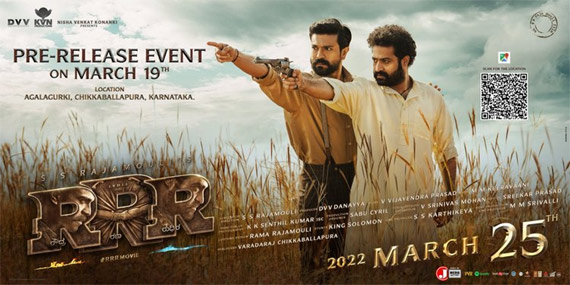 Tollywood star heroes, Jr NTR and Ram Charan, have joined hands for RRR, a magnum opus directed by the ace filmmaker SS Rajamouli. Billed to be the biggest action drama, the movie is all set for a grand release on March 25, 2022.

The movie’s grand pre-release event is all set to happen at Chikkaballapur in Karnataka on March 19, 2022. Now, the latest gossip is that Megastar Chiranjeevi and Nandamuri Balakrishna will grace the pre-release event. An official announcement is awaited from the makers.

The grapevine is that the event will happen funnily. It means that Chiranjeevi will support Jr NTR and Balakrishna will take Ram Charan’s side during the grand event.

Alia Bhatt, Ajay Devgn, Shriya Saran, Olivia Morris, Samuthirakani, Rahul Ramakrishna and others are playing significant roles in this action drama. Produced by DVV Danayya on a grand scale, the movie’s music has been composed by MM Keeravaani.