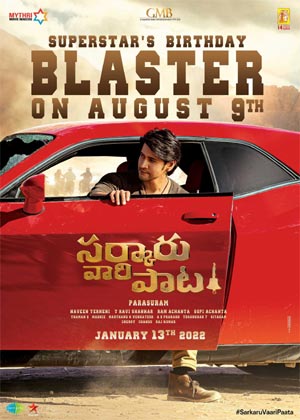 The makers of Mahesh Babu’s Sarkaru Vaari Paata had recently announced that the first teaser of the film will be out on 9th August, which marks Mahesh’s birthday.

Apparently, Mahesh Babu’s scintillating screen presence will be the main highlight of the teaser which has been titled ‘SSMB Blaster’.

Mahesh’s swag and electrifying BGM from Thaman will be a standout in the teaser. In all likelihood, this teaser will give a glimpse of the action episodes that were shot in Dubai.

Sarkaru Vaari Paata is slated for theatrical release on 13th January next year. The film is directed by Parasuram and it features Keerthy Suresh in leading lady role.