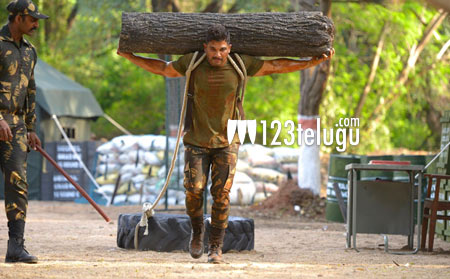 Allu Arjun’s forthcoming film Naa Peru Surya is progressing at a brisk pace. Recently, the makers announced that the film will hit the screens on May 4 and the team is working hard to meet all the deadlines. Directed by Vakkantham Vamsi, the film has Allu Arjun playing an army officer.

As per the latest reports, an action sequence, which was shot at Nanakramguda few days ago, is going to be a major highlight of the film. A special tunnel set was erected for this sequence, and the scene was canned on Allu Arjun apart from several other extras. The sequence is, reportedly, part of the interval block in the film.

Anu Emmanuel is the lead actress in this film. Vishal-Shekar are scoring the music.