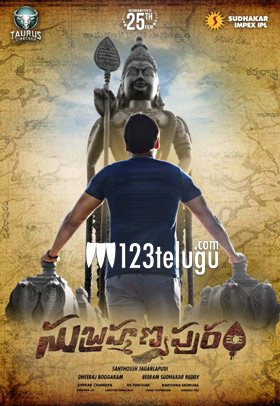 The first look poster for hero Sumanth’s silver jubilee film, Subramanyapuram, has been unveiled by Sumanth on his Twitter this morning. The intriguing poster reveals Sumanth looking at a giant idol of Lord Subramanyeswara.

Sumanth revealed that the film’s shoot is halfway through and that the theatrical release will be in November. Eesha Rebba is the film’s leading lady and debutant Santhosh Jagarlapudi is the director. Dheeraj Boggaram and Sudhakar Reddy Beeram are jointly bankrolling this project under Taurus Cine Corp banner.