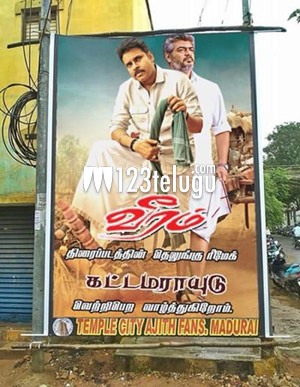 Pawan Kalyan is a huge matinee idol for millions of his die-hard fans across the world. The Power Star also commands a decent fan following in Tamil Nadu. But of late, the craze for Pawan in the Tamil land is increasing at a rapid pace​, courtesy Thala Ajith’s fans.

Both Pawan and Ajith are much similar to each other when it comes to conducting themselves in their public and private lives. During his UK visit last year, Pawan said he will definitely act alongside Ajith if he comes across a suitable script. Since then, Pawan became a favorite among Ajith fans.

Now that Pawan ​is remaking Ajith’s Veeram in the form of Katamarayudu and also lining up yet another remake of Ajith’s​ Vedalam next year, Ajith fans are showcasing their admiration for Pawan by putting up banners and flexies in several areas in Tamil Nadu. Will all this hype and hoopla impel Pawan to step into Kollywood with a straight Tamil film someday? Isn’t it the right time for Pawan’s Kollywood debut?