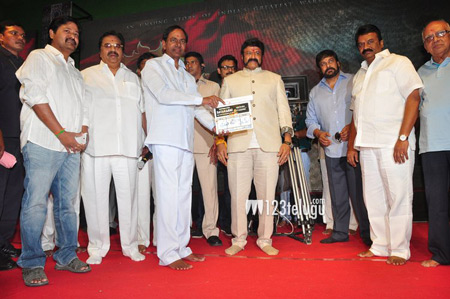 Gautamiputra Satakarni, Nandamuri Balakrishna’s most eagerly awaited 100th film, has been launched in a grand manner in Hyderabad this morning. All the who’s who of the film and political worlds graced the event to wish Balayya and the film’s unit on this memorable occasion.

NBK100 took off with Telangana CM KCR giving the muhurtham clap, while Megastar Chiranjeevi switched on the camera and Venkatesh cranked the camera. KCR wished that Balayya’s efforts in bringing Telugu history onto the silver screen should find success. KCR also said that he will be the first person to watch the film along with his family.

Gautamiputra Satakarni will be directed by Krish and produced by Rajeev Reddy. More details about the film will be revealed soon.